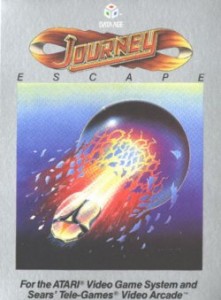 One game I really loved for the Atari 2600 was Journey Escape. It was a difficult game by Atari standards. I remember playing for hours and getting so frustrated I threw the joystick down in anger. Sure enough, minutes later I was back at it, dodging the groupies and promoters again.

I remember being in a thrift store when I was younger and coming across a cassette tape with the same cover as the Atari game. Turns out the game was based on Journey’s Escape album. I bought the tape and I also realized the music in the game was “Don’t Stop Believin'” from the tape. I remember for the longest time, I thought that was the coolest thing ever.

The game is about the band Journey. You are playing the part of the band members trying to leave a concert and get to their space ship. Almost everything in the game causes you to slow down. The game has a time limit and every time you touch things it slows you down and takes money from you. There are 2 things you can touch without it slowing you down. In fact they let you go through everything to reach the ship.

The things you encounter are:

Love-sick Groupies
They will move towards you and rob you of time and $300.

Shifty-eyed Promoter
They will try to make you an Offer you can’t refuse and take $2000.

Sneaky Photographers
They seem to come out from nowhere to take your picture and take $600.

Stage Barriers
They slow you down.

Loyal Roadie
These guys will help you for a while. They will keep the crowd away for you.

Mighty Manager
These guys are the most useful, they will keep the crowd away until the end of the level and pay you $9,900.

Journey’s Scarab
This is your escape vehicle. Touch this and the level is over.

If you can reach the scarab with all the band members, the game is over and you won!

As an added bonus, I found the original commercial advertising the game. 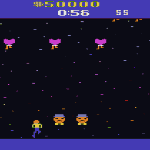 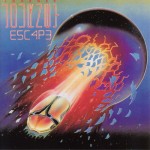 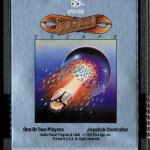 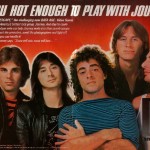