These days, gamers take online play and downloadable content for granted. Did you know it has been around for more than 30 years? Most were failed experiments, others just didn’t have the subscriber base to get off the ground, and one ended up taking the internet to a whole new level. I’m going to list the first examples of network gaming going all the way back to the Intellivision.

In 1981, Mattel came up with a way to allow local cable television companies to let gamers download games over the same cable they used for their TV. The PlayCable adapter fit into a standard cartridge slot like any other game. It worked by downloading data into memory on the cartridge and playing it like any other cartridge. Most games of the time were around 4kb in size and more complex games were coming out and sometimes doubling in size. Because the games were getting bigger and the limited memory space available for the games, it was discontinued in 1983.

The CVC GameLine was a device created for the Atari 2600 to provide games, news, stock quotes, sports scores and much more. The company went out of business before anything other than games were implemented. The cartridge looked like an larger than normal game cartridge except it was silver and had a phone jack on the side. It worked by calling up a server and downloading a game that the gamer paid for. The price per game was cheap, because the game would work for 5-10 plays before it had to be bought again or until another game was purchased.

Interesting note: After the company met it’s demise, the founders started another company that networked Commodore computers together and offered much of the same content planned for the Gameline. That company eventually was renamed America OnLine.

Japan in the 80s had the Nintendo Famicom instead of the NES, and it had all the cool goodies. Along with the Famicom Disk System, they also had a modem. The modem connected to a server and allowed a few downloadable games. Mostly it was for accessing weather forecasts, entertainment, stock trading and game cheats. 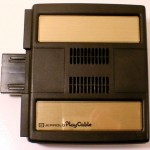 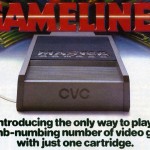 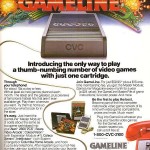 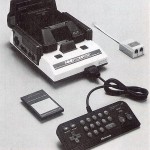 Even though online connectivity started here, it didn’t end here for the classic systems. Part 2 will cover the 90s.