Racing for the Playstation

After reviewing a pair of end of life era Playstation games released by Mud Duck and ZeniMax, I remembered that there was yet another company that did this as well. With titles such as Bowling, Billiards, Boxing, Shooter: Space Shot and simply Racing, A1 Games and Agetec were seemingly kings of the generic, end of life Playstation game market. As you can tell by the list almost all of their games are named after exactly what they are, and with such creatively titled games comes equally bland and lifeless cover art.

I will admit, however, that I actually own a few A1/Agetec games. Why? Because A1 Games did release some games that were quite good, with names that invoked a little bit more intrigue than just a boring name like Bowling. I bought Battle Hunter because it claimed to be a turn-based RPG, clinging to the success of Final Fantasy Tactics, and while it clearly doesn’t have the polish that FF Tactics did, I find Battle Hunter to be surprisingly enjoyable. But after the kind of mess that Mud Duck and ZeniMax made of All Star Racing what could we expect from A1 Games’ disasterpiece titled Racing? 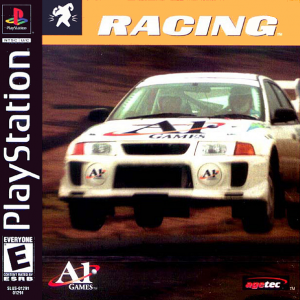 What Racing immediately has counting against it is extremely bland cover art, a painfully generic name and being released at the end of the Playstation’s life, but that’s just scratching the surface. Once you get into the game you’re greeted with A1/Agetec’s patented blandness throughout. The screens are almost all black, with very little life or effort put into drawing you into the game. I suppose A1 Games figured if you got this far they’ve already got your $10, why try any harder?

Initial options are Start, Continue or Tutorial, the latter being nothing more than just a dozen static screens explaining the controls and a little bit about what not to do in this game. You see, while their heart may have, perhaps accidentally, been in the right place by offering this tutorial, none of it matters due to the poorly programmed racing mechanics. 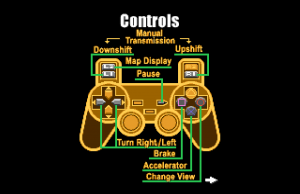 As with almost all racing games trying to be a racing sim you’ll have to start from the bottom and work your way to the top. Your first class option is Novice, and you only have 1 car to choose from. With this one car you’re allowed a few more options, only making Racing seem slightly more like a real racing game. Choose between Automatic or manual, grip traction or drift and now it’s time to decide which of the two tracks you’re going to face. Yes, only two tracks; perhaps there is a mirror option later on, but I didn’t stick around long enough to find out.

Now that you’ve picked your options and track, it’s time to win, because in Novice that’s all you can do, unless you try really hard to lose. Handling in Novice feels amazing, which is a poor setup for later classes, being three in total, so all you need to do is put the pedal to the metal, corner safely and bring home the win. Immediately you may notice a few things such as there is a musical track that can’t be turned down nor off, there are only two view points with no option to look behind you, and that once you’ve won the race the game actually acknowledges you’ve won. Yes, this game acknowledges you’ve won by showing a replay and by putting a golden 1 on a flag at the post race summary. Although better than All Star Racing, this still doesn’t make you feel your effort was appreciated in any way.

After mastering both tracks in Novice you’ll unlock the Pro class, which is where all the game’s flaw shine brighter than a million Suns. Remember how easy Novice was? Well forget that, because in Pro the struggle is real!

What the game does in the Novice class is setup a false sense of security, as if you’ve learned to control the car completely. In any class above Novice you’ll notice the car breaks loose far too easily in corners you could, and should, be able to take at full speed. This tends to cause the car to do some weird, anti gravity spin that forces you to let off the gas completely, or else the car will just do donuts in place, regardless of which way you’re steering to correct it. What it really boils down to is simply learning to nurse the accelerator without hitting the brakes at all, which is a lesson in frustration. And this is on Grip settings, don’t even get me started on Drift!

Many of the inherent flaws of Playstation era racing games show up in Racing too, but mostly due to poor programming and design. Collisions are the era standard, merely bumping each other and slowing each other down instantly, albeit better than All Star Racing. Approximately 5 feet from any corner or wall are invisible bumpers that slow you down and sometimes even stop your car instantly for no good reason. But the creme de la creme of the programming flaws in Racing happen on the long track, mostly, where all the cars, including AI, will bottom out on inclines, causing them to slow down dramatically.

What Racing has going for it is that it is indeed racing, so the title isn’t a lie. The car models do look nice, even if there isn’t any real variety at all and they handle like they’re driving on baby oil. However, the flaws in this game outshine the the few, very few, beams of glimmering hope. Oh, did I mention second place isn’t good enough? You’ll need to suffer through this game to get first in both tracks before you can unlock the new classes. All that said, this game is horrible! 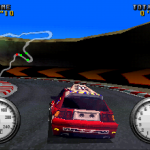 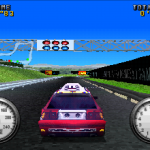 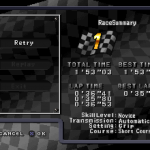 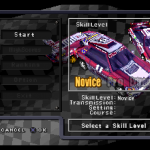