There are many good reasons to buy an aftermarket housing for your old handheld games console. Whether it’s purely for visual appeal or, as with mine, your Gameboy develops a bad case of post mushrooming (a term I made up signifying the tops of the screw posts mushrooming out and no longer holding the screws properly), aftermarket housings are readily available online.

A few years ago I bought an aftermarket Gameboy Color housing thinking I could convert one of my many bright green consoles over to yellow. This experience quickly taught me that aftermarket shells for handhelds aren’t always as good as OEM. That’s why this time I opted for a custom feel and bought the transparent orange and black kit to reshell one of my DMG-01s. 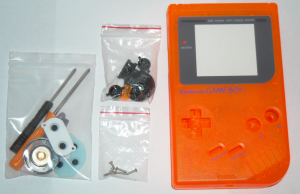 Immediately I was blown away at just how beautiful the transparent orange was; I really tried to capture it in photos but I simply couldn’t. Secondly I was pleasantly surprised that this kit not only comes with tools to put it all together, but also a spare speaker. I decided to leave the old speaker in because it still works, but if I ever need one down the road, I have a spare. One of the downsides though was that this kit does not include new screws to put everything back together. It did come with a small bag of mismatched screws that were fairly useless to me, but regardless I already have the screws from the original DMG housing, so everything was fine.

Now that we have selected our aftermarket housing we’ll get started by taking the old one apart. The first thing you’ll need to do is flip your DMG-01 over and find the six screws located on the back. Sometimes these are tri-wing and on older DMGs these will simply be philips head, so don’t panic and think your childhood DMG is a knockoff if yours has the latter. 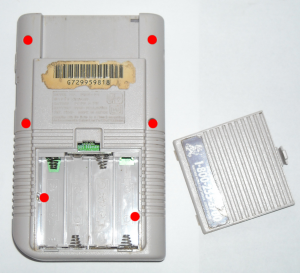 Once you’ve removed those six screws you’ll want to be careful not to separate the two halves just yet, as they are still being held together by a ribbon cable that easily detaches from the back portion. Carefully, and firmly, grasp the ribbon cable and give it a gentle pull downwards. It should release fairly easily as it simply slides in to make contact. 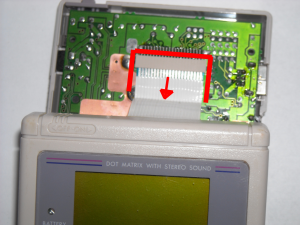 Now that your DMG is in two halves you still have quite a few screws to undo. In the front portion you’re going to have a total of ten screws holding the screen and controls board to the shell, while on the back you’re only going to have four screws holding in the cartridge slot and headphone jack to the back portion. 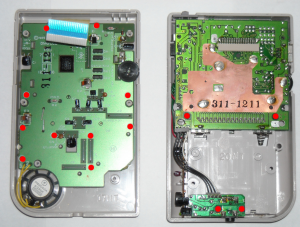 Once all fourteen of those screws are removed your DMG is now homeless, but hopefully only for a short time. From here on out everything should be fairly obvious. All you have to do is swap out part for part and reassemble in reverse order, thus I didn’t take the time to include photos of these steps.

Your first choice of the build will be whether to use the old buttons or new ones included with the kit. Using the new ones seems like the obvious choice, but this may come with a small caveat. The A and B buttons included in my kit have slightly deeper back recesses than the originals, leaving a gap between them and the rubber pads. If left this way the A and B buttons rattle around, and worse become difficult to press once the Gameboy is in play position. The included sets of rubber pads are perfectly fine, it’s simply a deeper mold on the new A and B buttons. I easily fixed this problem by folding some electrical tape and pushing it down into the recess. It’s not perfect, but in the end it works fine and the new buttons aren’t as mushy as they were straight out of the package.

Once all the buttons are swapped out to your liking you’re going to want to grab the black rubber bar that goes along the screen’s ribbon cable and put that on the new shell. Gently place the screen and controls board into the new shell, make sure everything lines up and prepare to install the screws. Now this is where things get a bit difficult, but with a little patience not too difficult. The newly cast housing has posts for the screws, but no threads have been cut, so be careful when you’re placing in the screws not to cut cross threads or to apply too much torque and strip the post completely. Out of all the screws only one screw stripped on me.

The back portion of the DMG is even easier as everything should align perfectly and, if you use the exact same precaution as you did with the front, these four screws should go in without any problems. Make sure you didn’t forget to install the new, or the old, power switch before you button everything up. The same caution should be taken for the six screws used to hold the whole thing together. After you’re done you should have a brand new looking DMG-01. (comparison pics below) 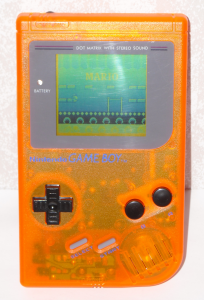 What I like about the kit: The transparent orange is absolutely beautiful. It came complete with the tools to put it together, a spare speaker, the matching port cover and battery cover, as well as a brand new lens. The molding matched up perfectly, meaning neither of the halves were twisted or distorted. Finally an old, faithful DMG-01 has a house it can live comfortably in, show off a little bit and look and feel better in the process.

What I don’t like about the kit: The area around the D-pad isn’t concave like OEM, making using the D-pad feel a little weird. The included A and B buttons need a little modification to be used. The new power switch isn’t as tall as the OEM, it still functions but you may need to have a bit of a finger nail to use it. The port cover is far too loose and within the first half hour of having this kit I had lost it three times (possibly fixed by gently adjusting port’s outer metal shield). The screws included were of absolutely no use, but I already had an almost full set from my OEM housing.

Whether you want a custom look or just need to get your old handheld out of a shell that is falling apart, (not only did mine have post mushrooming, but some posts were even broken off completely) aftermarket shells are a good investment. As I stated before, most aftermarket housings won’t be as good as OEM, but with OEM housings only getting older these kits provide a cheap and simple way to extend or renew the life of your handheld. And, if worse comes to worst, these kits are cheap ways to make an old beat up Gameboy that may not even work a beautiful display piece.

I bought mine from Orient Mall on Amazon. You can get yours here.